So, in case you were unaware or unconscious, last night was the Grammys.  Full disclosure, I didn’t watch the whole thing, because I don’t have a TV (not because I’m better than you, but because I’m poorer than you.)

Seattle rapper Macklemore, besides being my pasty Irish doppelganger (see photo), was awarded statues for best rap performance and best rap song, for “Thrift Shop,” best rap album for “The Heist” and best new artist.  Much has been written about Macklemore, both before the Grammys and after. 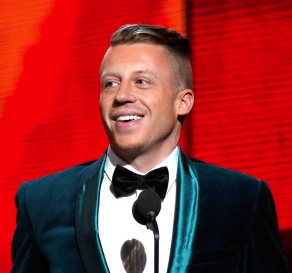 Many accuse him of cultural appropriation, a charge that rang especially true as he beat out black hip-hop artists in category after category, most notably Kendrick Lamar, the favorite for Best Rap Album.  As much as I would like to engage in this debate, I honestly feel that it is out of my depth.  I’m certainly not going to be one more white voice telling people of color about how they are supposed to feel about the appropriation of their cultures.  There are plenty of people who are better able to address this topic than me, and I hope you’ll understand that I’m going to leave it to them.

What I would like to talk about is the media attention around Macklemore as a voice for the gay community, and specifically his performance at the Grammys last night.  In case you missed it, click the screencap below: 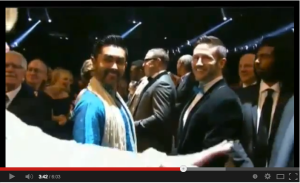 The marriage ceremony starts at about the 3:00 mark, but I suggest you watch the whole thing.

First off, while I did not watch the entire awards show, I did watch Macklemore’s performance in its entirety.  Basically, he and the perpetually unnamed and openly lesbian Mary Lambert sang “Same Love,” Macklemore’s ode to same-sex marriage rights, which has been controversial, to put it lightly.

At the denouement of this performance, in a highly publicized moved, Queen Latifah (herself the subject of unceasing gay rumors) stepped out on stage and performed a mass wedding ceremony for 30 or so couples, some gay and some straight.  Then for some reason Madonna showed up and “sang” a few bars of “Open your heart to me,” which the cynic in me can only interpret as a plea to retain her “gay icon” status.”  (Sidenote, speaking of cultural appropriation, nice “pimp cane” and grill, Madge.)  But I digress.

And I will openly admit to owning all of Macklemore’s albums.  Does that mean I’m 100% a fan of everything he does?  Not by a long shot.  But if I’ve gleaned one thing from the media coverage around the song, it’s that we have a lot more to talk about than just Macklemore.

Perhaps the biggest critique of this song is that Macklemore himself is not gay, and in the first verse of the song goes out of his way to make that very clear:

When I was in the third grade I thought that I was gay,
‘Cause I could draw, my uncle was, and I kept my room straight.
I told my mom, tears rushing down my face
She’s like “Ben you’ve loved girls since before pre-k, trippin’
Yeah, I guess she had a point, didn’t she?
Bunch of stereotypes all in my head.
I remember doing the math like, “Yeah, I’m good at little league”
A preconceived idea of what it all meant

Critics often want to view this as Macklemore clearly demarcating his heterosexuality in opposition to the gay people he’s rapping about.  And they’re not wrong.  But what they fail to take into account is that this is probably also 100% true.  I’m afraid that what happens when we focus on these lyrics is that we forget to address why the 10-year-old Macklemore would cry over the very thought of turning out gay, even as the nephew of a gay uncle.  This verse always hits home with me because I have a very vivid memory of coming home crying, after a particularly intense day of bullying, and having this EXACT conversation with my mother.

I was raised in an extremely supportive home, as it seems Macklemore was as well.  But no amount of your mother reassuring you that she’ll love you no matter what can completely block out the overt homophobia to which we are all exposed in our culture.  I like to think this is changing to some extent today, but both Macklemore and I grew up in a world without “Glee,” and without almost any examples of positive gay role models in mainstream culture.  And let us also not forget that in the 90’s, gay still meant AIDS, and AIDS still meant death.  I am gay, and I didn’t want to be gay.  I don’t think admitting to that makes me any less a supporter of human rights, and I don’t think it should for Macklemore either.  I don’t think allies should upstage the communities they support (discussed below), but I do think allies can’t be held to a higher standard than that to which we hold ourselves.  I can’t pretend to know what he was thinking when he wrote those lines.  All I know is that, were I asked to write this song, I might have started it the same way.  I think if we ask artists to be truthful, we can’t at the same time expect them to be flawless.

There is a reason this post is called a partial defense of Macklemore.  Among many critiques, I firmly believe that he should be asked to explain this.

Troubling tweets notwithstanding, there are still plenty of things left to critique about Macklemore and his Grammy performance.  First, he almost never makes any mention of Mary Lambert, the openly lesbian female voice on the song, and author of the hook that arguably makes the song memorable in the first place.  Due to the limitations of the Internet, I’m not sure if she was introduced at any point during the Grammys performance, but I’ve seen several performances of the song where her name is never mentioned.

This at best seems like an act of hubris on Macklemore’s part, but at worst it feels like an act of both lesbian and general queer erasure.  Macklemore has to have known that there would be controversy surrounding this song from the get-go.  No only does Ms. Lambert deserve to be recognized, it seems like such an easy gesture in the face of mounting accusations that Macklemore is attempting to speak for a community that isn’t his.

Secondly, while it is important to note that “Same Love” was written for a specific purpose (in support of the legalization of marriage equality in Washington state), the song is undeniably problematic.

As discussed in previous posts on this blog, the emphasis on marriage in the LGBTQ movement is controversial at best and damaging at worst.  Focusing on marriage as the sole gateway to rights reinforces patriarchal relationships between partners, as well as between couples and the state.  Additionally, it erases and invisibilizes the lived realities of poly and asexual people, as well as people who simply don’t want to get married.

But what I really don’t like about the song is the line “I can’t change even if I tried, even if I wanted to…”  For regular readers, it should come as no surprise that I think the immutability (or not) of sexuality is a moot point.  Arguing that our sexuality can’t be changed or is not a choice should not be our battle cry.  Shouldn’t we strive for a world in which that doesn’t matter?  Am I not allowed to choose what I do (and allow others to do) with my body and my heart?

All of these issues are things we’re not talking about as we rail against Macklemore for making what I sincerely believe has been a largely positive impact in the realm of mainstreaming gay rights.  Don’t get me wrong.  We should continue to have those conversations.  But I find it troubling that the antics of celebrities are creating the illusion that we’re having meaningful dialogue in this country.

When Miley Cyrus twerked, those of us who were interested talked about the cultural appropriation involved.  But most people just talked about Miley Cyrus, the way they were already talking about her (general schadenfreude with a dash of good ol’ fashioned slut shaming).   And I think a similar thing (minus the slut shaming) is happening with Macklemore.  We’re talking more about the fact that he’s a “bad ally” than we are about why a song like “Same Love” has to exist in the first place.  Why, in 2014, are same-sex marriages still so controversial that they are a ratings draw?  Why does the culture persist in ignoring songs about gay rights until they are sung by straight people?  Neither of these things is Mackelmore’s fault, although he has certainly benefitted.   Our sound-bite culture is starting a lot of conversations it’s not finishing.  So yes, let’s start the conversation with Macklemore, or Miley, or whoever it will be next week (my money is on the Biebs.)  But let’s make sure we don’t end it with them.