Yesterday, in what I can only assume was a ploy to get people to talk about anything besides his own current scandal, New Jersey governor Chris Christie vetoed a bill that would allow trans* people in New Jersey to be issued new birth certificates to reflect their gender without first undergoing genital surgery.  He claims that this legislation would lead to “fraud, deception and abuse, and should therefore be closely scrutinized and sparingly approved.” 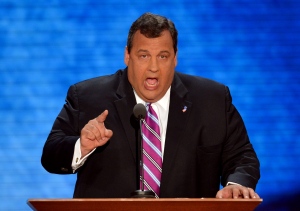 Despite support in both the New Jersey House and Senate, the bill is far from veto-proof.  Supporters are not optimistic that the bill will pass in the near future, especially not in Christie’s New Jersey, where political revenge is anything but rare.

It is not, I would say, surprising that a member of the GOP does not support trans* rights.  For me, that’s not the issue here.  There are two issues that trouble me much more.

First, I’d like to address Christie’s “logic” (quotation marks used very much deliberately) that allowing people’s documentation to reflect their true genders would contribute to fraud.  Does this seem totally backwards to anyone else?  If, hypothetically, I were a trans* man, I have to assume that I would not stop living my life as a man simply because my birth certificate had an “F” on it.  To the average passerby or civil servant, would it not be more confusing and indicative of fraud for my documentation to present a gender that I’m not performing?  Doesn’t it seem like allowing people to claim the gender with which they most closely identify would prevent problems?

But the issue is deeper than this.  The bottom line here is that my penis does not make me a man, and my waking up with a vagina tomorrow would not make me a woman.  People don’t miraculously change genders based on the genitalia they happen to have been born with.  Furthermore, physical sex is no more a legitimate binary than the gender binary, and that idea that penis=man and vagina=woman leaves out a lot of people, most notably intersex people.

Last week, Katie Couric had trans* actress Laverne Cox and trans* model Carmen Carrera on her to show, ostensibly to talk about trans* issues and these women’s upcoming projects. 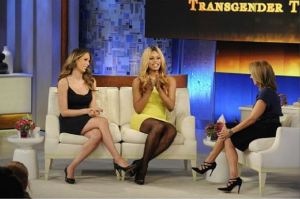 Instead, the show rapidly devolved into a Maury Povich-style interrogation about the nitty gritty details of gender confirmation surgery and what each of these two women might be packing (or not) under their designer frocks.  Both women did an admirable job of redirecting the conversation and informing Ms. Couric that the

“…preoccupation with transition and surgery objectifies trans people and then we don’t get to really deal with real lived experiences; the reality. By focusing on bodies we don’t focus on the lived realities of that oppression and that discrimination. “

But the point is, they shouldn’t have had to defend their surgical choices.  By positioning genital surgery as the only acceptable marker of “true” gender transition, we ignore the fact that this is not an option for the vast majority of trans* people.  Hormones alone cost insane amounts of money and are often not covered by insurance.  Additionally, trans* people are twice as likely to be unemployed as their cis-gendered peers, making it harder for them to get any kind of insurance in the first place.  We live in a country without universal healthcare or anti-discrimination laws that legally protect LGBTQ people, and we’re demanding that trans* people magically come up with tens of thousands of dollars for gender confirmation surgery?

This is, undoubtedly, illogical and unacceptable in and of itself.  But there’s an even larger problem with this whole line of thought: maybe not every trans* people wants to have gender confirmation surgery.  Many trans* people do not overtly identify as male or female, instead opting for the use of gender neutral pronouns, an option that is unfortunately not legally possible in this country.  Additionally, surgery (and I say this as someone who has had more than his fair share) sucks.  It’s painful, it’s expensive, it’s risky, and it requires that you have time to recover.  There are countless reasons that a trans* person, or any person could have for not wanting to undergo surgery, especially if it will not make a qualitative difference in the way they conceive of their own gender identity.  Why should anyone have to go through a potentially painful and dangerous process to satisfy Chris Christie?

To be clear, I am all for gender confirmation for anybody that wants it.  I also think we should have universal health care that pays for it, but that’s another post.  The point I’m trying to make here is that trans* people, like all  people, should be entitled to the right to do whatever they want with their bodies, and equally important, to define them in any way they see fit.  If the gender and sex binaries were so natural and automatic, we wouldn’t have to keep talking about them all the time, and there wouldn’t be outliers.  We don’t have to walk around shouting that the sky is still blue, just to make sure we’re all still on the same page.

If we have to debate what makes us men, or women, or neither, that points to the idea that we don’t actually know.  I would argue that anybody who identifies as a given gender merits being treated accordingly.  But to be clear, I also don’t know; I’m not trans*.  I have the privilege of not walking around having to justify my gender identity.  What I do know is what doesn’t define our gender.  To adapt a line (erroneously) attributed to Freud, “sometimes a dick is just a dick.”